A second round of co-design session in Belval. Designers and historians discussing the first interface prototype

On 11 July, one week after the impresso Laurel workshop in Lausanne, the Luxembourg team from the C2DH presented the groundwork of the project to historians on site and to one of the associated researchers of the impresso project, Torsten Kahlert, from Aarhus University in Denmark.

Marten Düring led the presentation and reiterated the main objectives of the impresso project: first, the creation of a relevant historical media monitoring tool suite; second, the development of both a “smart” visualisation interface and visual analytics via a co-design approach; and third, the application of the project to digital history research and its epistemological context through a historical use case on resistance to the European idea. After updating the attendees with the latest news on newspaper acquisition by the consortium, Marten Düring presented the system architecture and the successive steps required to process the newspapers before they can be made available to the public – in particular the OCR process which all texts must go through and which requires the expertise of the Institute of Computational Linguistics at the University of Zurich.

Since the aim of impresso is to help historians throughout their research projects, several participants presented their own use cases to the audience. Estelle Bunout introduced her ongoing research on the anti-European posture in the public debate in Switzerland and Luxembourg from 1848 to 1945, a study that was central to the initial project. Julien Nguyễn Đăng shared his findings on representations of space and space conquests with a use case about extraterrestrials. Frédéric Clavert (C2DH) proposed a study on German conservatism, Nazism and antisemitism based on an analysis of extensive press corpora to identify the precise role of German conservatives in the making and consolidation of the Third Reich. Victoria Mouton (C2DH) focused on the contemporary international press and its views on the Luxembourg financial centre. Stefania Scagliola (C2DH) looked at the press coverage of the Holocaust denial by Iranian President Ahmadinejad in December 2005. Finally, Torsten Kahlert (Aarhus University, Denmark) presented his prosopographical work on the staff of the League of Nations Secretariat.

Daniele Guido then introduced the interface currently being developed and its search and read functions, before the participants logged into a first version of the website to test its functionalities and give precious feedback to the team. As Estelle Bunout explained later, this interface is part of the research workflow: users will be able to create research collections, filter their searches and access metadata that has been either manually inputted or added from the files of the Swiss and Luxembourgish national libraries. As Estelle Bunout showed in relation to her own research, visualisation, in addition to metadata, will help provide an overview of the studied press sources.

A second round of co-design session in Belval. Designers and historians discussing the first interface prototype, Blog post, impresso, 2018 <http://impresso-project.ch/news/2018/07/11/lavender.html>. 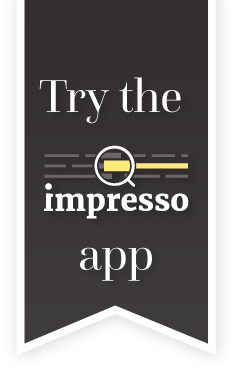